“And in second place – Iris Chatbot from Leapfrog Technology and OpenI”.  A crowd of hundreds of healthcare technology peers and pundits had just voted Iris, our intelligent chatbot that refills medications and schedules doctors appointments, as best-in-show at the HL7 Applications Roundtable.

How did Iris, whipped up over the course of weeks not months, resonate so strongly with a room full of researchers, doctors, and healthcare technologists?

After all, there were other presentations that were so mature and medically impactful that I felt humbled to be in the same conference. Have a look at the recorded presentation to see Iris in action and form your own hypotheses.  But my answer is simple and testifies to the potential of chatbots: unlike some entries, the audience easily understood what we’d built and could immediately see a lot of people using it.  And that’s because chatbots promise to make complex interactions seem simple by being the UX humans use everyday – natural language and conversation.

Is the chatbot hype warranted?

In fact, there have been a lot of promises.  O’Reilly said 2016 was the year of the chatbots.  Business.com thinks 2017. Pundits are speculating what problems chatbots could solve in the coming years, ranging from commerce to customer service to healthcare to food.

In this multi-part blog series I’d like to explore the answer.  Part I briefly outlines the history, recent hype, and developer landscape for chatbots.

My first (and only, knock on wood) psychotherapist was a chatbot.  Her name was ELIZA, and while my personal sessions were on my Macintosh in the early 90’s, ELIZA was born at MIT’s AI Lab over 50 years ago.  ELIZA, the world’s first chatbot, mimicked a therapist in about 200 lines of code.  Researchers (and users like me) were blown away by the emotional engagement garnered by the simplest of conversation trees.

Chatbot experimentation continued, with another breakthrough with A.L.I.C.E, inspired by ELIZA, but which used pattern matching heuristics to enable a less limited, more natural conversational experience.  A.L.I.C.E, in turn, inspired an academy award winning film called “Her” that centered around the emotional connection between human and bot.

Pre-2015, the most widely adopted chatbot was SmarterChild, developed in 2000.  SmarterChild understood limited natural language, but perhaps most importantly plugged into the first text-centric interfaces for consumers:  AOL Instant Messenger and SMS.

Yet, starting with Macintosh and Windows in1980’s, all the way through iPhone’s introduction and Android’s increasing popularity, the focus of computer interface has been the graphical user interface (GUI).  The GUI was based on the idea that people don’t want conversational interfaces; that users don’t want to remember what to type or be forced to type when clicking is faster and visual affordances less confusing than language affordances.   Part II will explore why we seem to have come full circle.

Fast forward to 2017, and the hype cycle on chatbots has hit a crescendo since the doors were blown open when Facebook launched their bot platform for messenger over a year ago. Over 11,000 bots had been developed within months of the messenger bot launch.  Sensationally, Gartner predicted that “By 2020, the average person will have more conversations with bots than with their spouse.” 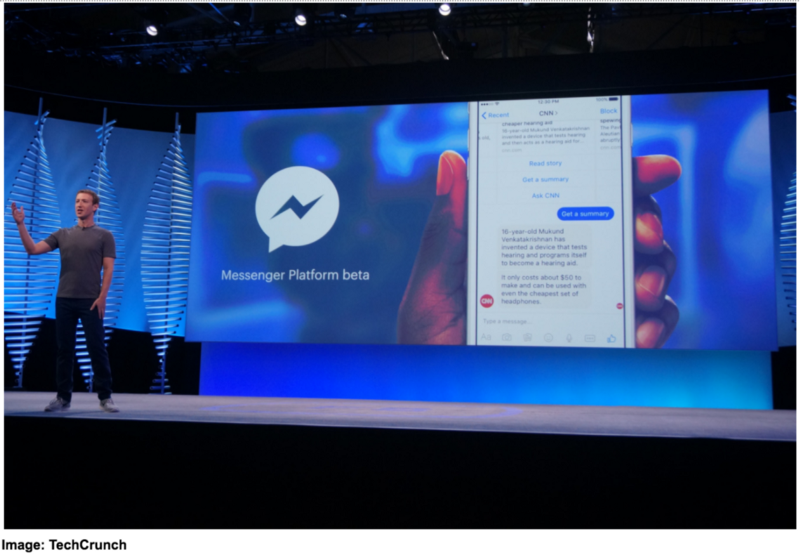 On the investment side, bot funded lists 80 recently funded chatbot start-ups, Slack is constantly putting its own $80M USD bot fund to use, and hundreds of millions were invested in bot startups in 2015 and 2016 alone.  Angels and VCs alike, seem to love bots.  And well, it’s not officially a hype cycle without Kim Kardashian.

Businesses have followed the trend.  I can use a bot to order TacboBell or Chipotle, Domino’s or Pizza Hut, or a burger from BurgerKing as suits my appetite.  I can get news from CNN or Fox News as suits my politics.  And of course, I can choose the Lyft or Uber bot to catch a ride.  Bots are even social.  I never have to watch a show alone with Atticus, AT&T’s entertainment bot, or I prefer basketball I ask the NBA’s bot for scores and team updates.  80% of businesses want chatbots by 2020.

It’s notable that by and large, I need to use a platform like Messenger or Alexa, to access those business’s chatbot experiences.  This makes sense, as just like for any other App development, discovery is paramount: even the most charismatic chatbot lives a lonely existence without real people to talk to.

According to Comscore, 80% of mobile app usage is spent in a user’s top three apps, and for 2.5 Billion people, at least one of those three apps is messaging.  This reinforces a bigger trend, that to be successful with consumers it’s no longer enough to have an app because app stores are a broken graveyard littered with compelling apps that nobody ever found.  As a developer, if you want your app to be used then it needs to be discoverable from within the few apps people use habitually.  More and more so, that habitat is voice and text controlled.

Like social apps and mobile app stores before them, there is an ecosystem arms race brewing for conversational interfaces.  This time around, instead of one dominant trailblazer like Facebook for social apps or Apple for app stores, there are more players at the party:

Natural language processing (NLP) is hard, machine learning driven bots are even harder, and even basic keyword-based conversation trees deceptively tricky beyond basic use cases.   There is the cutting edge, for example, approaches that combine topics like Deep Learning, Machine Learning, and NLP in search of the ultimate chatbots.  However commensurate with the hype, chatbots have bred new technologies and platforms that make building ChatBots more accessible to more people:

Given the hype, reach, and technical feasibility, the future couldn’t be brighter for Chatbots and other conversational interfaces…right?

The hype and supporting technologies are here.  Businesses and consumers are interested.  Leapfrog is interested.  But are conversational interfaces going to take over the world?  Is the promise real when Facebook found their own chatbots couldn’t answer 70% of its user’s questions, and themselves plan to dial back their chatbot efforts to use cases that work?

In Part II, I’ll survey combinations of use cases, conversational UX, and technologies that appear to be working, and attempt to synthesize where hype meets reality.

Chris Sprague is the CEO of Leapfrog Technology, Inc.

Overview: Traditionally, mentorships are provided based on titles, wisdom, hierarchy, and status. Tribute platform believes that wisdom is gained from

Background The conventional process for a Machine Learning/Data Science related project usually starts with the data. It consists of different

Switching from a Data Science Hobbyist to a Professional?

As a data hobbyist, we might build many models with different data sets and alter these to analyze the outputs.