The Story of Why we Switched to Figma

At Leapfrog, we used the Sketch app as our primary tool for UI design. Globally, it has revolutionized the way we work now compared to how we used Photoshop before.

We work on many different types of projects both small and large scale. Our standard workflow included Sketch for UI design, google drive/dropbox for file storage and version control, and Invision app for prototyping.

This workflow was smooth for smaller projects, but we faced significant hiccups for the large-scale ones. Collaboration between multiple designers was a problem, and version control was even hard. We did try Abstract during its initial days, but our workflow was still not smooth. We knew we had to switch our workflow to Figma or any other tool sooner or later.

And in late 2019, we officially switched 90% of our projects to Figma, which drastically changed the way we work. Though we formally moved to Figma in late 2019, we had been using it for internal collaboration and informal design explorations. As it was still in its developing phase and was not matured enough, we were not comfortable with the significant change then.

Fast forward to today, we have completely switched to Figma, and here are the 5 main reasons why we did so and how it has changed our workflow:-

Our usual workflow includes collaboration with multiple stakeholders and designers. Though we could do that using Sketch and Invision itself, it was time-consuming.

Figma’s collaboration feature has been a significant game-changer. The ability to collaborate with multiple contributors and quickly share the live ideas with the stakeholders and their dropping comments directly on the files has helped us speed up the design process. This has also helped us gain trust from our clients and stakeholders as they can see the change made in real-time. 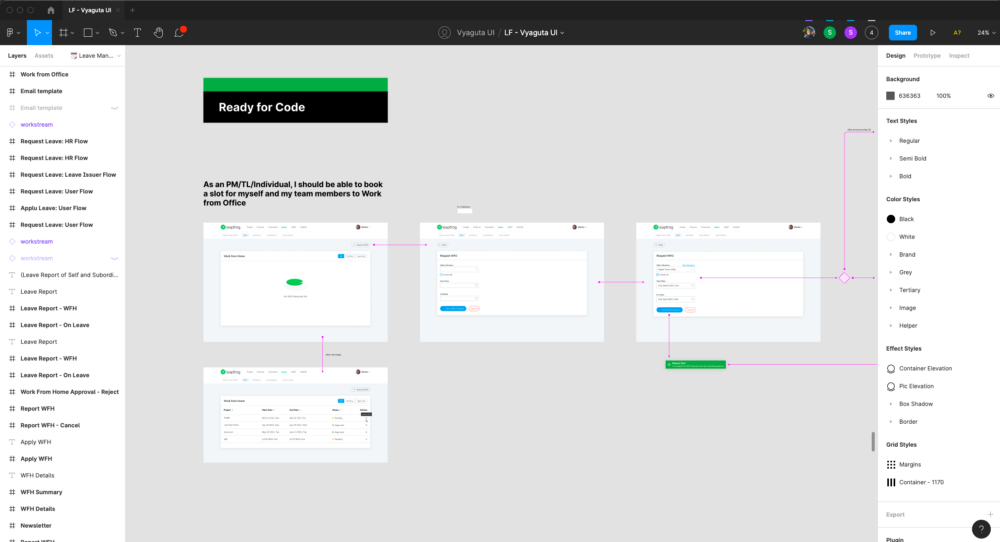 Google drive and dropbox were our primary tools to control all the sketch file versions in sync and keep them all in one place. However, the need to download and sync the files each time and make sure the changes are communicated on a timely basis so that we don’t override anyone’s progress was frustrating.

Now not having to worry about this after we moved to Figma is a vital relief.

Designing on Sketch and syncing changes on Invision via craft to share with the devs and the stakeholders had its downsides. There were multiple incidents when a bug in the craft plugin app delayed our work and even messed up all our screens, resulting in having to re-do them again. Not to forget the bigger the sketch file size, the longer it took to sync the changes in Invision.

This completely changed when we moved to Figma. The designers, developers, and stakeholders are always looking at the same file. We don’t need to use a completely different tool for handoff and prototyping. And changes are instant. Saving us a lot of valuable time.

Not all of our designers use a mac, and Sketch being mac only and adding up the additional cost of Invision made it a very expensive workflow. Often, our marketing team also needed access to work on minor designs, and Adobe Suite is too costly.

Figma became our go-to tool as we could save on cost without compromising time and efficiency. Since it runs on in the browser, everyone could use it no matter what operating system they were using. And our marketing team can also use it for their quick design requirements.

A few of our projects were scaling up, and along with that using a single Sketch file was no longer efficient. We did try using the Sketch team library feature, but it was buggy, and it was actually adding up additional work.

This was actually one of the main reasons why we decided to switch to Figma. We tested the design system feature with one of our most significant projects in the company. And after successfully moving everything into the platform in about a month, we were confident that we could do this for the rest of our projects. Hence the big shift happened.

In addition to all of this, we have conducted many internal Figma training sessions within the company.

Apart from the designers most of our team members including the marketing team, the project managers, the events management team, and the administration teams, are very comfortable with the tool. They use it for a lot of other purposes besides UI design.

Looking at the scale of how rapid Figma is growing day by day, we are hopeful that it is here to stay for a few more years, and will continue making our lives easier as a designer.

Check out Saroj Shahi on Dribbble.

Saroj Shahi is a Lead Product Designer at Leapfrog.

Leapfrog Design Team: Ask Us Anything!

A few weeks ago, our design team hosted an Ask Us Anything session on their social media. We received a

Design is all about putting people first. Every design decision has the potential to include or exclude users. Inclusive design

Everyone of us has heard a story before. Stories command attention and draw persuasion. They can be deep, persuasive, and